Talk about a career highlight and an experience I will never forget! 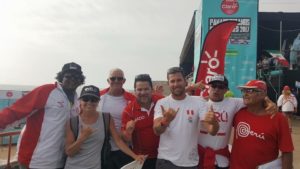 I wasn’t able to keep y’all updated as I was just too busy. At the end of each day I was simply spent! It was really refreshing to work with such high caliber athletes and coaches. I had the pleasure of working with and learning from Australian Martin Dunn, who’s experience and knowledge is so extensive, I felt like a grade school child compared to his PhD-like coaching status. While not an aficionado of the longboard, Martin’s expertise is unparalleled and the amount of information he has to offer professional competitive level surfers seems never-ending. I really feel blessed to have had the opportunity to work with and learn from him.

Anthony Vela is another coach with whom I had the joy of working with and learning from. His charismatic personality coupled with his superior communication skills allowed all of the team to feel connected, even though his job was to specifically work with the SUPers. It really is amazing when the right people come together: magic happens! Words don’t do it justice! 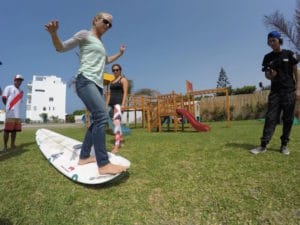 Like in most places, shortboarding is the avenue of surfing mainly promoted in Perú, so that being said, there weren’t as many in my crew of longboard trainees as the shortboarders. Despite the lesser numbers, I had a team of longboarders who were not only highly skilled, but eager to learn more! And they charged some waves that I, personally, don’t care to ride anymore (or really ever! lol). Other than my girl Carolina Thun, I was really impressed with a number of the guys:

I also worked with a few fantastic women…

The PanAmerican event gave each team 2 longboard ladies & 2 longboard mens spots. One spot in each division was already spoken for by Mafer and Piccolo (see my shout out below). So, the task was set before me to choose 2 riders from a pool of 4: Tamil & Lucas for the men and Carolina & Camila for the girls. Since I had had the opportunity to get to know and train with Carolina, there was most definitely a soft spot for her, but anyone that knows me knows that I’m all about fairness and giving credit where credit is due, even if it doesn’t work out as your dreams envisioned. That said, I took my job seriously and thoroughly investigated my choices. 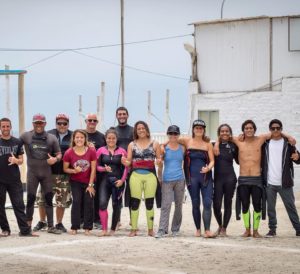 When it came to the guys, I have to say that while Tamil’s style and control was next to flawless, there was something about Lucas that gravitated me towards him. Sure, he is a handsome young 20-year old, but that wasn’t all of it. His energy and fire and constant questions on how to improve were especially intriguing to me. But when we put him and Tamil up to the task and performed some mock heats with 2x World Longboard Champion, Piccolo Clemente, well, all that fire and energy seemed to explode without enough direction. Tamil, on the other hand, handled himself cool, calm, and collected with quick stalling noserides off the take off in well overhead surf. The choice was clear, Tamil would be our man. Unfortunately, a sickness was going around (I got it too!) that left Tamil working at about 60% on the day of the event. He charged through the first round, but was unable to move into medal position along with Piccolo.

The girls, as they usually are, were a different story. Here I had Carolina, with whom I had already been working with for the last couple weeks. She was initially a shortboarder, but came to the light a few months ago. This year, she participated and placed 3rd in the WSL event at Huanchaco, which put her in the top standings for the Latin American region. While she’s got her turns pretty much down, her noseriding begs for improvement. On the contrary, Camila is far more proficient of a noserider and although she needs work with her fluid combination of maneuvers & turns, she was definitely more consistent getting to the nose. When it came down to it, myself and the other coaches had to evaluate who, overall, had the most competitive experience and consistency and who could be as strong individually as they were a team player. After a long deliberation the selection was made: Carolina was our gal! She proved to all that we made the right choice by battling through a number of heats to finally win the 3rd place bronze medal. I have to express not only my gratitude for Carolina, but my pride as well. This journey was not an easy road and she still has lots too work on, but she is one of the hardest working, classiest people I know! 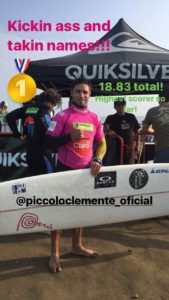 Fortunately for me, I was referred for this job by THE main dude in the Peruvian LB scene: 2x World Longboard champion, Piccolo Clemente. It’s not too often where you meet people who talk the talk, but also walk the walk. Piccolo is one of them. I was a bit intimidated to know that I’d be working a bit with him since he already has a couple titles, shapes his own longboards, and is generally not a big talker. I can honestly say, though, that it was such a pleasure to witness and work alongside such a professional. I couldn’t be more grateful for his endorsement!

One of the most special moments was a chat I had with Sebastian Gomez who received one of the two SUP surf spots when Tamil Martino fell ill. This kid is not only passionate about the sport, but his fiery passion is equaled by his amazing skill. There’s no doubt that his talent will take him far, but what will help pave a solid path and foundation for Sebastion is his love and faith in Christ. Over dinner on the eve of the final event, we talked about the “grand plan” and that he find joy in whatever the Lord had in store for him. The moment when the results were announced indicating that he made the final was quite possibly the most elated moment of the entire event for me. Sebastian’s pure joy and pride in himself exuded and shone so bright. I think he walked around with his comp jersey on for a good several minutes afterward! Too cute.

I must also give my warmest love and thanks to: